DETROIT – All Detroit government employees paid for out of the city’s general fund would earn no less than $15 per hour starting July 1, 2022 under a proposed “Employee Minimum Wage” announced today by Mayor Mike Duggan and Councilwoman Latisha Johnson (Dist. 4).

The City has been tracking and steadily increasing wages for employees earning below $15 per hour since 2019 and the time is right to complete the task, said Mayor Duggan.

The move would ensure that the starting pay for all city employees would be a minimum of $15 per hour and raise the pay for about 270 current employees in those classifications who have not yet reached that mark. The proposal requires the consent of the unions in amending collective bargaining agreements and the approval of City Council.

“For the past several years, we have been looking at every job classification in the city and working with our unions to increase pay every time we’ve had a chance,” the Mayor said.  “The good news is that the vast majority of city employees already earn more than $15 per hour.  Now, because the city is in a position where we can sustain the additional cost of making sure every employee of the city of Detroit is earning a living wage from the moment they are hired.”

The new standard of a $15 per hour minimum wage will require a change to the City’s Master Pay Schedule which sets the pay range for all general fund city positions.  Councilmember Johnson, who campaigned on the issue of a $15 minimum wage, has sponsored a resolution that would make those amendments.

“The City of Detroit is one of the largest employers in southeast Michigan, and how it treats its employees has a significant impact on families and the local economy,” said Councilwoman Johnson. “Better wages will uplift families, enable the city to attract and retain better workers, and stimulate the local economy. It’s a win for us all. That’s why I am honored that Mayor Duggan asked me to sponsor the $15 minimum wage for City of Detroit employees."

“This living wage will affect about 270 City employees in thirty-four (34) positions at the cost of approximately $1.3 million dollars,” Johnson added. “This amount is a small price to pay for the many benefits that will accrue to our community. I am grateful to Mayor Duggan for the opportunity to play a role in uplifting our deserving citizens and our great city.”

Who would be impacted

According to the Master Pay Schedule:

The types of positions affected include General Service Department employees, including recreation play leaders, forestry helpers, mechanical helper and garage attendants.  The change also would raise the pay for many DDOT, DPD and elections workers.  The positions with the most current employees to receive pay raises under the proposal are:

The proposal does not apply to non-general fund departments, such as the Water & Sewerage Department, which is funded through the revenue it collects for its services, or non-city-run agencies.  However, DWSD, which has approximately 550 employees, already has taken steps to guarantee no employees are paid below $15 per hour. 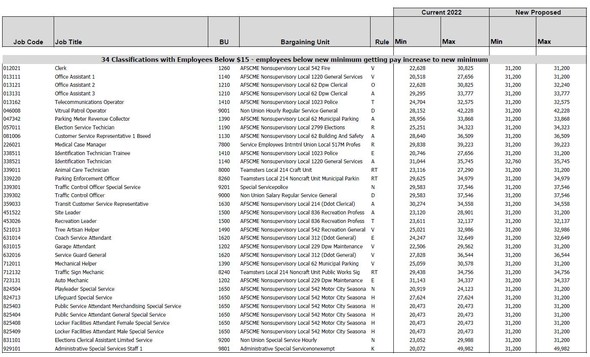